We have learned that the school was in two locations during its life time.  When researching the deed, a copy of a lease was found with it, dating back to 1832.   .. one was directly on the turnpike, the other was on a small road on the west side of the river, which at this time, leads to the Sullivan Materials mining operation.  The first location was approximately 1/4 mile west of the Neversink River at the intersection of the Newburgh-Cochecton Turnpike (presently Old Route 17) and Thompsonville Road and it served its students at that site between 1832 and  just prior to 1856.  The school was relocated Southward to a location on the  west bank of the Neversink River.     The school appears on the maps from both 1856 and 1875.  The reason for the relocation was to have the school situated approximately half way between Bridgeville and the small river community of Tannersville further to the South.   It is our understanding that the school was then closed around 1908 and the children on the east side of the river would now attend the Rock Hill school, and those on the West would attend the Towner school.

This is the covered bridge which was the first of its type in New York State.  It was constructed in 1807 as part of the Newburgh Cochecton Turnpike. 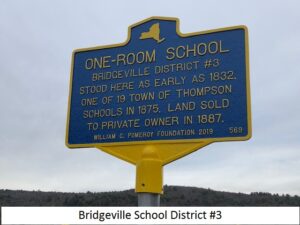