This school is located on present day Fraser Road, 1/8 mile west of New York State Route 42  from the four corners of “Kiamesha.”

The property was deeded to the school in July of 1868. We are uncertain regarding when it was closed, but it was most likely in the early  1960’s.  The property was sold in 1966.

The building was used for a number of years as a nursery school/ day care center and was known as “Tiny Tots” as you will see on one of the photos.  It was also used as a local polling place during the 1960s and 70s.

The building still stands, though it is unused.

Former students have provided the following photographs of several social events at local venues at the time: 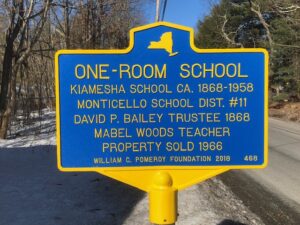 Mission Accomplished on September 5, 2018, as this commemorative sign was installed in front of the school!

Here is a report card that was donated by Arnold Silver  that shows his promotion to 7th Grade!   Notice that the page on the left provided the teacher’s appraisal of his character.    We are certain  that the “X”  was  short for “exceptional!”  The date was not provided. 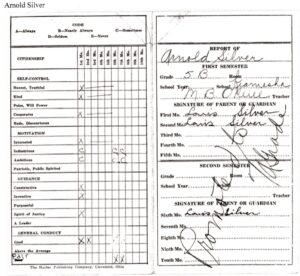