The Maplewood School District #6  was situated along the Newburgh- Cochecton Turnpike,  just west of Monticello.  It was opened in 1848 and closed 99 years later in 1947.  The road is now known as NY State Route 17B.   The building and property were sold in 1956.  It was used as a store for a period of time and was  then converted to a private residence and has remained as such ever since.  When the building was sold in 1956, the proceeds were used to establish a scholarship fund. The Rapp and Cederia families continue to administrate the fund.

This school provided the elementary education of several notable persons of distinction in their adult and professional years.

George L. Cooke  was barely old enough to hold a teacher’s certificate when he was hired by the trustees of District #6.    At some point he transferred to the Kiamesha school.     He left the classroom  to study law and became a very successful attorney in Monticello.    He went on to be elected as the District Attorney , and eventually the County Judge in 1926.     George L. Cooke passed away in 1959 at the age of 81.    A new elementary school in Monticello was constructed in 1960 and was named in Judge Cooke’s honor.

Judith Smith Kaye (1938 – 2016) was the first woman to serve on the New York State Court of Appeals, and she was the  court’s first female Chief Justice.  Judith’s parents settled on a small farm in Maplewood, and she attended this one room school for a time until her parents sold the farm and moved in to Monticello.   She credited her teacher at the school, Miss Kitz (who was the last teacher at the time of its closing) with giving her an important head start in her education.

Max Yasgur (1920 – 1973) was raised on a farm and attended the Maplewood school.   He attended New York University where he studied real estate law.   Shortly after returning from college, his family sold the farm and he relocated to a new farm in Bethel NY, where he eventually became the county’s largest milk producer.    In 1969, Max stepped into history by renting 600 acres of his farm to the promoters of the infamous Woodstock Music and Arts fair.  And the rest is part of world history.

Anne Kaplan –    Mrs. Kaplan was the first female Mayor in Sullivan County as she officiated over the affairs of the Village of Monticello from January 1974 through 1976.     While serving as a village trustee, the board of trustees appointed her to the position of Mayor to fill the vacancy left by David Kaufman who was elected to the office of Supervisor of the Town of Thompson.  Anne was the daughter of Isadore and Esther Rappaport and was born in the family’s farm house in Maplewood on April 20, 1923. She was one of six  children, all of whom attended the Maplewood one room school.      She married Moe Kaplan, and together they founded and operated Kaplan’s Restaurant on Broadway in Monticello, which eventually achieved worldwide fame!  Anne Kaplan passed away on October 2 2012. 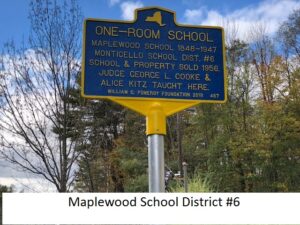