This beautiful old school house adorns our home page of this website because of the simple beauty of the photo.  “Liberty Road”  was the primary route between Monticello and Liberty in its day, and this school was located near the intersection of Kutsher Road and it served the farm families of the area.

As roads were improved in the area, this “main” route to Liberty was replaced by NY Route 17, and this road became known as it is called today…   I’m glad they didn’t change it to “Previous Liberty Road,” or ” Former Liberty Road!”

I received an email from an old buddy who rode the school bus with me and my brother.   Bobby Chicko and his family lived at the North east corner of the intersection of Old Liberty Road and Kutsher Roads within “spittin’ distance of the school house.  His father, Alex Chicko,  was a “house mover”  back then, and they also had some bungalows on their property for summer guests and perhaps accommodated  some overflow from the popular Kutsher’s Country Club which was just a quarter mile down the road if you had turned right at this intersection.   Bob was reminiscing about his childhood and he shared a bit of interesting history about this school house.

Bob’s mother, Mary Chicko,    was employed by the school during its final years.   Each school day, she would open the building, and prepare it for the busy day ahead.   In the winter months, she would start the fire in the traditional pot belied stove which would have been positioned in the middle of the room.   She also brought in firewood as needed for each day.        At the end of every school day,   Mary would  perform the cleaning by sweeping and mopping the floors, cleaning the blackboards, and whatever else needed to be done.

In the early 1950s, after the school had been closed,   Bob’s uncle Frank Promowitz, who had property on the other side of Old Liberty Road,   purchased the building.   Bob’s dad, Alex,   jacked it up and moved it across the road on to Frank’s property, where it became his personal wood working shop.

Bob shares “Some time while I was in high school (mid 1960s), Frank burned the building down.  It was rotten and in ill repair.  My uncle had more time for fishing than working.   I remember standing and watching the flames.”

Thank you for sharing Bob!! 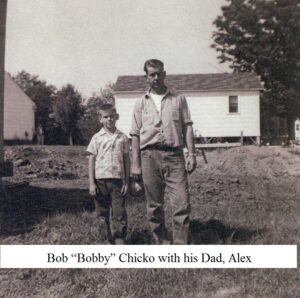