The property for the Sackett Lake school  was acquired in February of 1858.   As you will see on the map, this school was at the southwestern edge of the Town, and was close enough to provide education for  some students from the adjoining Town of Forestburgh.

The school was closed in 1947 after 89 years  of operation.   The property was sold in June of 1965 to the Ace Hunting Club, who continues to be the present owner.  The original building was  destroyed by fire in 2002. 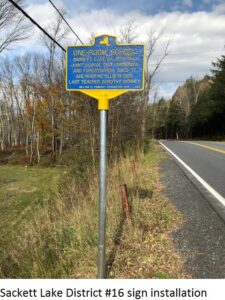 Teachers would have to get  “re certified” for each school year as shown by this document for teacher Laura Reed for the 1903 to 1904 school year at the Sackett Lake School.   Also, shown at the lower half, a “souvenir” card that was common in that era which featured a list of the students for each school year.    Obviously, the concept of “tenure” for these rural teachers had not been discovered as of 1904. 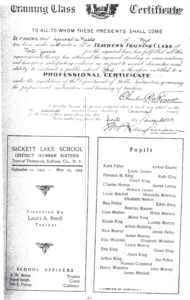