The Towner School was located  several miles east of the village of Monticello, and was situated along the Newburgh – Cochecton Turnpike at the top of the hill just before it dropped down into Bridgeville and crossed the Neversink River.      When the new Route 17 “Quickway” was constructed in the 1950s,   the former school property was a victim of “eminent domain”  and the site of the school is under the pavement of Exit 106 “East Monticello” on the westbound side of the highway.   Committee member Gordon MacAdam began searching the records at the County Tax Map office for evidence of this school’s exact location. After coming up empty, he thankfully was directed to inquire at the NYS Highway Department district office in Monticello..  Within minutes, the district engineer located a project map from 1955 which showed the school house, wood shed, and outhouses!

We do have a former student of this school,  Chester Smith, Sr. lives on Tappan Road.  His house was moved to its present location by the State during the construction project.

Our research discovered that the school  property was deeded to the Monticello School District, and therefore it was included in our application for a historical marker.   We obtained the following two photos from John Masten of Wurtsboro.

Here is a list of the students of the 1912 school year: 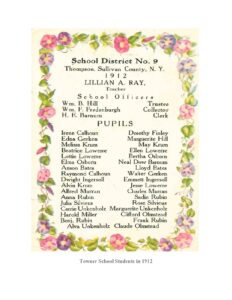 The  ownership of the Towner School property was taken by the New York State Department of Transportation by Eminent Domain to accommodate the construction of Exit Ramp #106  “East Monticello” exit for the new Route 17  four lane highway known as the “Quickway.”